Garbage trucks and waste disposal trucks have an important role to play in Hollywood and South Florida. Waste disposal keeps our streets clean and help us get rid of garbage from our homes, creating a more hygienic environment. 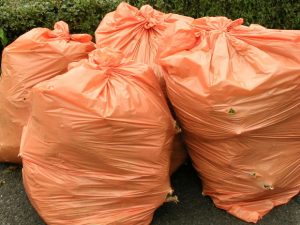 Each year, however, people across this country are injured and killed in waste disposal truck accidents. Waste disposal trucks are large vehicles that have to share the road with smaller cars and pedestrians – especially in residential areas. Garbage trucks are also very large, which can mean any collision involving these vehicles can be serious.

A fully loaded, rear-load garbage truck can weigh 44,000 pounds. These trucks have heavy duty hydraulic systems for compacting garbage. These systems can affect visibility and create more blind spots. In addition, most garbage trucks have metal parts sticking out of the sides or back, to help waste disposal workers with their jobs. The poor visibility, size, and the protuberances can all lead to disaster in a collision.

There are many other dangers associated with garbage trucks:

1) They make frequent stops and starts.

To get to everyone’s garbage bins, drivers of waste disposal trucks may need to stop often, turn around on narrow streets, and make other unusual maneuvers. The slow movement of these trucks on residential streets and their size can mean passenger car drivers get aggravated and impatient, which can lead to accidents. In some cases, motorists simply don’t look out for garbage trucks and may be surprised by an unusual maneuver or sudden stop, which can lead to a crash.

2) They work in areas where most commercial trucks don’t go.

One of the biggest dangers with these vehicles is that they frequently drive in residential areas. On freeways, motorists are used to seeing big rigs and tractor trailers, but on streets with mostly passenger cars, drivers may be less prepared for larger trucks. In addition, many streets in Hollywood and other South Florida cities are narrower, making it harder for the larger trucks to maneuver. Children may also not be used to seeing large trucks in their neighborhood and may not be aware of the dangers of garbage trucks.

3) They are allowed to drive on the wrong side of the road to pick up garbage from both sides of the street.

Passenger car drivers, pedestrians, and motorcyclists may not expect a vehicle on the wrong side of the street and need to stay alert to avoid a crash.

According to a 1999 research study in New York City, garbage truck collisions killed 25 times the number of pedestrians as passenger cars between 1994 and 1997, on a per-mile-driven basis. Obviously, it’s important for pedestrians and drivers to be aware of the risks in their neighborhood, and to talk to their children about not playing near larger trucks – including garage trucks.

If you have suffered an injury in a South Florida accident involving a garbage truck, contact Flaxman Law Group for a consultation. These cases are often a challenge, since garbage trucks and their employees generally work for the municipality, which enjoys added protections from legal action. The attorneys at Flaxman Law Group, however, aren’t afraid to stand up for what’s right. We’d be pleased to sit down with you and discuss your legal options with you in a free consultation.