Double trailers, as their name suggests, are two tractor trailers hitched together on the same cab, one after another. These vehicles provoke much debate and controversy, with some claiming they make roads safer and some suggesting double trailer trucks are an added risk on the roads. 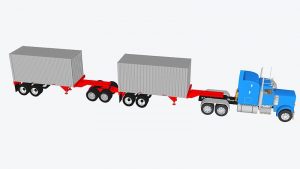 Advocates for double trailers – including those trying to convince Congress to change the rules to get more of these vehicles on the road – say double trailers are a good thing because:

Some truck drivers refer to double trailers as “widow makers” or “wiggle wagons.” In addition to proposed plans for more lenient rules for double trailers, some are also seeking to increase the size of individual trailers to 33 feet, which would allow for even more cargo on the roads. Some safety experts think increasing the size of trailers and allowing double trailers cold potentially be even more dangerous, since larger trailers may be more prone to rollover incidents while double trailers can cause crashes. Of especial concern is what would happen if a larger trailer swung outward into oncoming lanes in a scorpion tail – the larger size (if the larger sizes were approved) would potentially cause more damage.

There is some compelling evidence to suggest double trailers could be a danger. Studies by the U.S. Department of Transportation concluded that trucks with multiple trailers had fatal crash rates 11% higher than single-trailer trucks. Independent studies from MTIC in 2013 and 2014 also concluded that double trailer trailers have a fatality rate 11% higher than that of trucks with only one trailer.

What do you think? Do you think double trailers would mean more trucking collisions on Miami streets?

If you have been injured by any tractor trailer, contact Flaxman Law Group for a free consultation. Our legal team has more than 60 years of combined experience and we’d be happy to review your situation with you. We have represented thousands of South Florida plaintiffs and have secured tens of millions on dollars on behalf of clients. Contact our offices in Miami, Homestead, or Hollywood for a consultation.