In California and Chicago, there have recently been a number of smash and grab thefts, involving large, organized group of thieves targeting malls, luxury stores, and shopping centers. Florida and Miami also have seen such crimes in the past and there is often an increase in risk around this time of year. 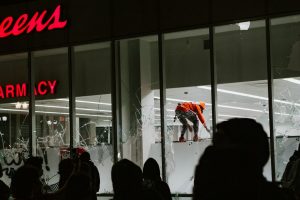 What Are Smash and Grab Thefts?

Smash and grab thefts can involve groups of people who run into a store or even ram a car into the front of the store to steal as much merchandise as possible. The attacks are very sudden and chaotic, sometimes involving many people at once.

These crimes have been more in the news recently because some states have moved to be less strict on so-called minor crimes, which has meant fewer consequences for some thieves. In addition, online platforms now give thieves more avenues than ever to sell stolen items. The chances of being caught remain low, especially if thieves cover their faces.

At this time of year, smash and grab crimes typically are on the rise as people feel financial pressure during the holidays and as stores stock up for holiday sales, meaning more merchandise is available. With more people shopping online, selling new items is also very profitable and thieves can often profit with very little risk.

What Injuries Can Happen?

Smash and grab attacks are very chaotic and while the intent is to steal rather than harm people, individuals are injured and even killed in these attacks. Thieves will often target store employees, especially security guards, who may stand in their way. They may also crash into shoppers or even assault shoppers to steal their belongings. Common injuries can include:

Being in a smash and grab can be devastating and can cause trauma, both for retail workers and shoppers. Personal property can be stolen or damaged and serious injuries are not uncommon.

What Can You Do if You’ve Been Injured in a Store in Miami?

Unfortunately, there is no real way to avoid being the victim of a smash and grab if you work in a store or shop in retail spaces. Stores can take precautions, such as hiring security personnel, to protect visitors and employees.

If you find yourself in a store when thieves enter, the best response is to avoid drawing attention to yourself and try to stay out of the way. Try to remember as many details as you can and work with the store employees to contact police once the thieves leave.

If you have been injured, get medical help at once. You can also always call Flaxman Law Group at 1-866-352-9626 (1-866-FLAXMAN) for a free consultation with Miami premises liability claims attorney. Our legal team can discuss whether you may have a potential claim.